I have noticed that Mom has developed some little quirks over time that come with her dementia but I rarely hear people mentioning such things in the books I read. I thought it might be helpful for people to know a little more about what can happen when a person has dementia and parkonsinism which comes with hallucinations.

I have written about Mom's hallucinations before, such as seeing a car drive into a grocery store, or seeing people in the house who are not there. Mom has always been quite aware of these and just asks us if we see what she sees. If we don't she knows it is a hallucination and she tries to ignore it. (Actually, I am quite impressed with how Mom handles the hallucinations as I would find that quite scary.)

Recently though she has been fixated on seeing certain things over and over again. I am not sure how much of this is the hallucinations and how much is the trouble she has with her eyesight, but either way, it has become a pattern now.

For months Mom has been insisting that someone is putting strings or worms in her food. This is much harder for her to understand is not actually there because she can pick up the piece of food and show us where she sees the string. We tell her we can't see it, but she does have something physical in her hand, so it seems more real to her than say, the car in the grocery store. Lately she has also been saying little spiders are crawling on her or on the floor and she keeps swiping them away or stepping on them. Again, it is harder for her to always know these are not real. She might be seeing some dirt on the floor, a piece of fuzz on her shirt, or hair that brushes on her neck, that all make her see and sometimes feel something crawling on her.

When Mom insists someone is putting strings in her food, we just tell her we don't see it and we try to explain it is just rice, or shredded cheese, etc... I can see she is getting a bit more insistent about it though. I think eventually we won't be able to explain it away for her anymore because her brain won't understand after a while. It's important to know that when people with dementia insist they see things or someone is doing something to them, they are not trying to be obstinate or annoy you. They really think what they are seeing is there. So try to understand where they are coming from, explain it if you can, divert their attention to something else, or change the situation. By change the situation I mean do things a bit differently. One day serving Mom food that is mixed together, like fried rice, or taco meat with cheese on it may be a bad idea. She may need all her food separated so she does not see "things" in her food.

Little quirks are common in people with dementia. It might surprise or scare us as caregivers, but it is actually normal. When we can understand what is going on, it is a bit easier for us to figure out how to deal with it and make things a bit easier for our loved one.

Email ThisBlogThis!Share to TwitterShare to FacebookShare to Pinterest
Labels: dementia

Today in our TimeSlips session, we added in another art form to experiment with. We made some Zentangles, which is a meditative art practice that enables you to make abstract pictures using different patterns. Simply put, it is meditative doodling. You take a blank square, draw in some guidelines, and then fill the square with any patterns you dream up. Then you can shade the finished square in with plain pencil if you want, but today we colored them with colored pencil. I took everyone's finished Zentangle and mounted them on colored note cards so everyone got to take home a handmade card they can use in the future.

This was a really great art exercise as it was accessible to the people in different stages of dementia and their caregivers were able to create as well. I think it was a relaxing and fun process for all of us.

There are many different art forms to be used in helping people with dementia, the key is finding things that are easy and abstract. 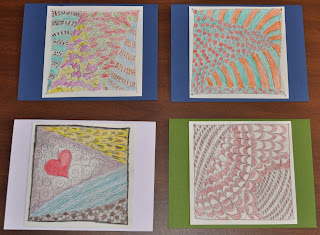 Zentangles are a great meditative art practice no matter your artisitic ability. Try it out, you will really like it! Then you can use your Zentangles for handmade cards, tags for Christmas gifts, or take a bunch and frame them in a large frame.

Visit My Other Blog

Rev. Katie Norris
Executive Director for the Carolyn L. Farrell Foundation for Brain Health. www.farrellfoundation.com I am a Unitarian Universalist minister, a wife, and a mother. My community ministry focuses on providing life enrichment programs and advocacy for people with dementia and mental illness.