We had another TimeSlips session today and we just had one couple able to attend. My sister helped me facilitate since my Dad is out of town. The dynamic is different with one couple, but they were wonderful and very willing to participate anyway. We had a great time socializing afterward.

One of the things that was really interesting to me today though was that we had a seven year old in the mix, my son Jeffrey. First Jeffrey helped me pick out the photos we would use and he thought of some starter questions for each photo. I was surprised by how engaged he was in the planning process. This made him excited to then go to the TimeSlips program. (It did help that one of the photos we used was of him from a few years back.)

At TimeSlips, he wanted to help facilitate, so he asked some of the questions, and he also contributed to the story. I was a bit worried that he did like to answer every question, but the couple was very nice about having him participate.

After we finished the storytelling and we were chatting, Jeffrey was playing a game on the iPad. I suggested that he show it to one of our participants, and Jeffrey, who is usually very shy, was quite engaged in showing how his game worked and our kind couple talked to him about what he was doing. It was a pretty simple game and that got us all to talking about the possibility of games on the iPad being accessible to people with dementia, even though maybe they need a caregiver to assist them. Just as Jeffrey was showing what part of the screen to press to make the game work today.

What I loved the best was seeing Jeffrey and the person with dementia laughing at the animal on the screen and really communicating in their own quiet way. I hope our new friend liked the experience as much as Jeffrey did.

Jeffrey said he had a really good time today. This was encouraging to me because he sees so much of the day to day caregiving that sometimes I worry he forgets we can have fun with people who are older than us. I was also heartened because usually Jeffrey won't talk to people and hides from them, but this storytelling brought him out of his shell and got him participating in a larger community.

The other thing that was quite interesting today was how talkative our participant with dementia was during the storytelling, but afterward when we were chatting and asking him about his grand kids, he could not participate. He was often unable remember names, ages, or what the kids were doing. He is a very smart and creative person, so alive during the storytelling, but much more apprehensive later when the conversation relied on memory.

Today again reiterated the power of this storytelling process, and showed me how this might work in a multigenerational setting.

Here is one of our stories from today (This is actually a photo of Jeffrey from when he was little): 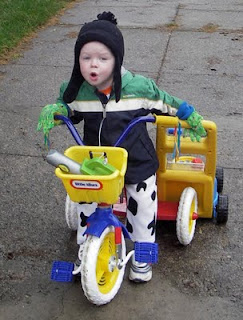 "The little boy's name is Jeffrey. He's talking to me. He's going somewhere alright. He's asking me for directions.

He's coming from the store. It is the fall-a kind of cold day. He's got some candy behind him. He's two years old. He's not 21.

There is a leaf blower in the basket. He's going home to help dad blow leaves and eat the candy."

Visit My Other Blog

Rev. Katie Norris
Executive Director for the Carolyn L. Farrell Foundation for Brain Health. www.farrellfoundation.com I am a Unitarian Universalist minister, a wife, and a mother. My community ministry focuses on providing life enrichment programs and advocacy for people with dementia and mental illness.